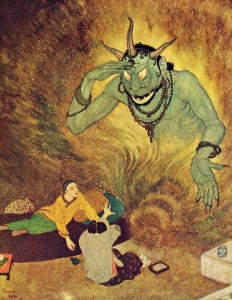 Once upon a time, there was a writer, walking in the night.

Those who encountered him and paid enough attention thought he looked sad, and a little lost.

The truth was that he was looking for inspiration. It had been months since the last time he had written anything that he liked.

He had used all his old tricks, even those advised by others. But this time, it seemed like music, absinthe and travelling with activists wouldn’t be enough.

But that night was special, as he was about to discover.
Stockholm’s streets were empty, and as he was passing a dark alley, he saw a shadow behind a wall…

The shadow, again. And the sound of a click.

Slowing down his pace, he decided to move forward anyway. Art can literally suck life out of you, he thought.

He passed the wall, and there she was. As pale and bold in her fashion choices as ever. And she was… Could it be?

It was. Snow White was pointing a gun at him. 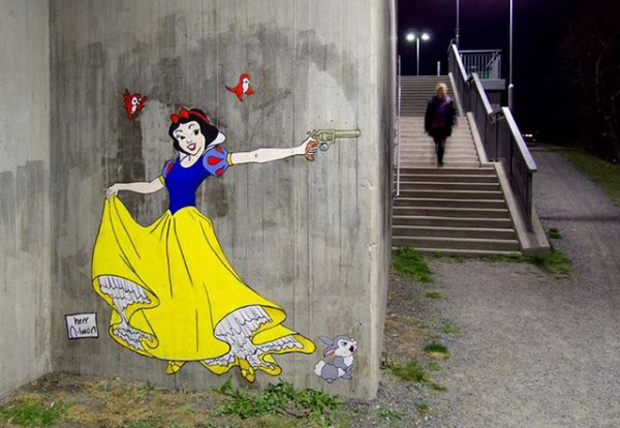 The writer followed Snow Fright in the night, half amused, a third confused, and one sixth a bit afraid. She had a gun, after all.

- So, what are we doing exactly, here?
- I was sent by Herr Nilsson.
- Herr Nilsson?
- He’s a street artist, who decided to give us, fairytale princesses, a new edge, by associating the bland image that was made popular by Walt Disney with more… independent vibes.
- Who knew a fairytale could give someone such inspiration!
- My point, exactly.
- What do you mean?

Snow Fright gave the writer a little mirror, and asked him to look into it.

RED from RED on Vimeo.

- Is it Little Red Riding Hood?
- As felt by directors Jorge Jaramillo and Carlo Guillot. They used the symbolism of colours and the power of Manuel Borda‘s music to give an emotional dimension to the story.
- Why are you showing me this?
- Don’t you get it?

Snow Fright and the writer passed a few empty and dark streets, and then reached another wall, to find no one else than…

- Are you…?
- Yes. Hurry. Have you seen me with a spindle? Well, you don’t want to watch me holding that rifle for too long. 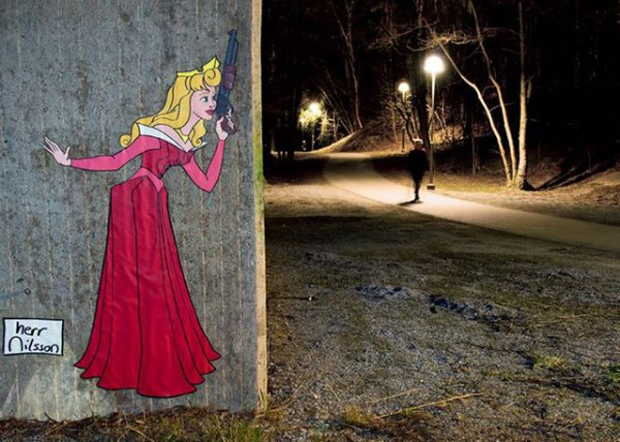 They started walking again. Many questions came to the writer’s mind, and it was almost as he could imagine some of the answers. He listened to the women talking, not trying to make sense of what was happening anymore, and just enjoying the moment.

The writer took a closer look at the pictures.

- A devious way to imagine what would happen after the happy end?
- This is from visual artist Dina Goldstein. She used Disney’s inspired characters , and imagined them living in our modern days, having the same concerns as everyone else: pollution, poverty, cancer…
- From tale to real life…
- Exactly my point!
- Really? Snow Fright already told me the same-

Suddenly jumping from behind a wall, a pale lady in a questionable blue dress pointed a knife at our writer. 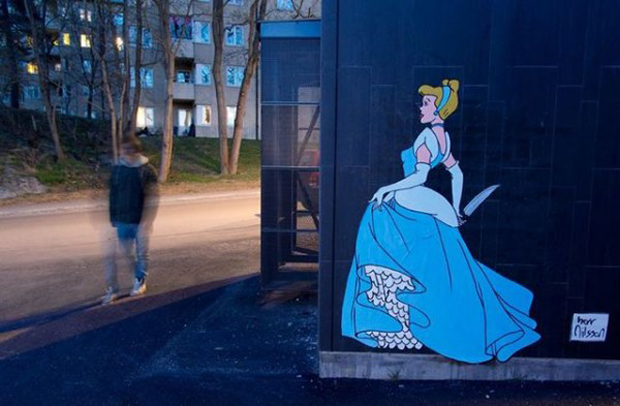 - Cinder-hell-a! It’s ok, it’s him, the writer. Put your knife down.
- Oh. I didn’t expect him to look charming but… to this point…
- Hey! I’m a writer, not a model.
- I’m sorry. It’s just that… I’m so sensitive to beauty. Pure beauty. And speaking about beauty… have you ever heard of Kaguya-hime?
- No.
- It’s one of the oldest japanese tales. It is about a little girl, who was discovered as a baby inside of a bamboo. She grew up to be one of the most beautiful women the world had ever seen. Soon, five princes came to her house to marry her, but she asked them impossible demands, so they couldn’t satisfy them. She refused to marry anyone, not even the emperor, and always looked very sad when full moon was out. One day, she revealed that she was not from this world but came from the Moon, and had to go back there. Finally, the Moon people came on Earth to take her, and she left with them.
Hoping that Kaguya-hime would receive it, the emperor climbed the highest mountain he could find to get as close to the sky as possible. When he reached the top of it, he incinerated a letter and the elixir of immortality she had given to him. It is said that this mountain is now known as the Mount Fuji, and that the smoke coming from it represents the remains of those objects.
- This is a beautiful story.
- You should see the ballet that is inspired by it. Japanese composer Maki Ishii and Czech choreographer Jirí Kylián worked together and combined elements of occidental and oriental cultures to make this tale come to life.

The writer was now full of ideas. Thoughts, questions, and even answers were twirling in his head. He needed some time to put it all on paper.

Just when he was thinking about writing for the first time in months, the three princesses suddenly stopped, and turned to him.

Behind them was a big blank page, the size of the world.

- What is that?
- It’s your turn to tell a story, now.
- This is your partition. Your canvas. Your matter. Your page.
- Have you ever heard of artist Svetlana Kolosova? She uses her own hands to paint the tales that inspire her:

- So… are you telling me I should take inspiration from old tales, to make new art?
- We’re just telling you that the possibilities are infinite. Those people we told you about, they were all inspired by tales, they used them, distorted them, expressed them in many different artistic ways.
- We’ve all heard those stories, and, consciously or not, they made their way through our mind, and shaped some of our visions of life.
- Tales can be the origin, or the matter used in art. But it’s just one of many.

The writer looked at the world-size blank page in front of him. Soon, his imagination started to fill it.

As he turned back to the princesses to thank them, he realized he was alone. Like some ghosts of Christmas, they had left him as soon as he had understood their words.

He turned again and faced the blank page. He had a lot to do. So many ideas, so many worlds to create, so many things to tell.