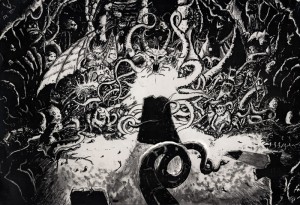 As a boy, he was gifted, writing poems and reading from an early age. Among his favorites were Edgar Allan Poe, Goya, or Henry Fuseli. Sick so often that he could barely go to school, he was also affected by night terrors.
His father died when he was 8, and he was raised by a depressive mother, aunts and grandfather. The latter introduced him to literature and horror, and after the man died, leaving the family in great financial distress, he started to fail at school, and ended up suffering from depression and suicidal thougts.

But instead of being a serial killer, Howard Phillips Lovecraft became the master of horror fiction.

Sadly, recognition came only after his death. Many years later, his work has proven to be one of the greatest influences in the art world, and will still be for many years to come, which is no surprise considering the richness and complexity of his universe.

Among others artists inspired by Lovecraft, Argentine writer Jose Luis Borges dedicated his dark and oppressive novel There are more things to the American master of dark and oppressive novels. Visual artist H.R. Giger named one of his books of paintings Necronomicon, after the famous fictional grimoire Lovecraft used as a tool for several of his tales. Comics writer Alan Moore also used a lot of the author’s themes in his stories, like The courtyard, and its sequel, Neonomicon.
Big names like Stephen King, Terry Pratchett, Ridley Scott , Moebius, Sam Raimi or John Carpenter all claimed to have been influenced by his work.

It is said that most of Lovecraft’s work was inspired to him by his nightmares and night terrors. No one will ever know what was really happening inside his mind, but we can always imagine. That’s what 3D artist Michele Botticelli did:

Now, what about reality? Lovecraft: Fear of the Unknown tells us more about the life of the author, the way his tales were inspired to him, and the huge influence he represents:

“Now all my tales are based on the fundamental premise that common human laws and interests and emotions have no validity or significance in the vast cosmos-at-large.”

The insignificance of the human being in the universe is perhaps the most important theme developed by Lovecraft. To him, if people were aware of all the existent knowledge, it would drive them crazy. And that’s what happens to many of his characters.

Following this idea, he created The Great Old Ones. Divinities from outer space who once ruled the Earth, but then went imprisoned, they are waiting for their release, and are worshipped by human cults. Cthulhu is the most legendary of them.
Described as “an octopus, a dragon, and a human caricature…. A pulpy, tentacled head surmounted a grotesque scaly body with rudimentary wings“, it is said that some of those who saw the monstruous creature immediatly died of terror, and that the others lived in fear for the rest of their days.

Cthulhu is of course a fantastic subject for visual illustration, and many artists shared their vision of the monster… Lovecraft being the first of them:

Cthulhu is probably the best possible embodiment of pure evil, and has been widely referred to by pop culture’s most famous characters. But only one of them could tame the beast.

It takes one to know one…

Another part of Lovecraft’s universe and the Cthulhu Mythos is the fictional town of Innsmouth. Referred to in several of the author’s works, this coastal town is the site of some dark events depicted in The shadow over Innsmouth. A tale, and a town, that inspired many visual artists.
We’ve already seen the Second Life version of Kowloon Walled City, now let’s take a tour of Innsmouth, and its very well captured dark atmosphere:

Lovecraft has a unique way of making readers uncomfortable and fascinated at the same time. Not that many writers can induce pure terror with their words. He did that by using his own psychological issues and nightmares, turning them into great creative tools.

Could this be the best possible therapy?