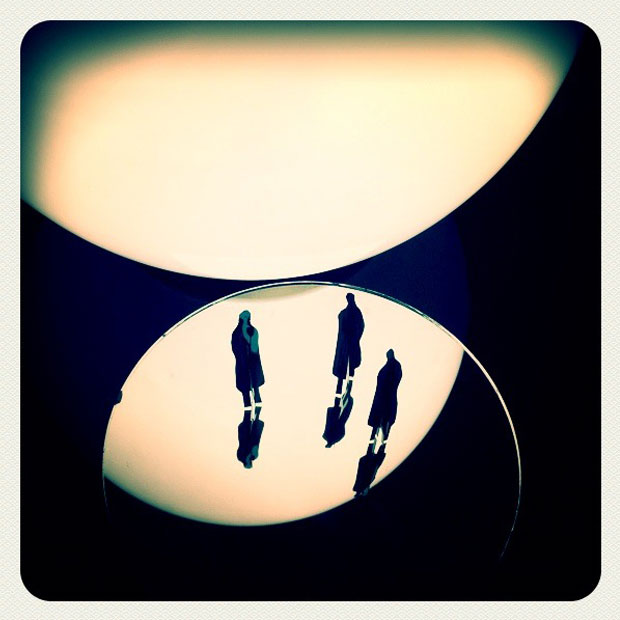 What are the coordinates of an image in a mirror?

The body occupies space, and space, between atoms, occupies the body. We are familiar with the idea that we circulate through space, moving from place to place.  To think of places moving around inside of us is not commonplace.

I must warn you of the fact that this text does not aspire to any logical rigor. Only a fool would require consistency about the odyssey of an idea, or about the journey of a feeling. This is about Image-in-action, HEADING towards… my mind (Mind the gaps of the mind!). Leaving the mind to travel free, from an image to another image, from a reflection to another reflection, in motion. In motion, emotion. Emotions moving us, in the path of passions, evoking places lost in memory. The memory that drags time which drags space.

In a place with no coordinates.

If space is four-dimensional and the process of remembering (of bringing things back to present) does not follow a KRONOS-LOGIC, it is difficult to assign coordinates to the extremes of movement of an idea, from a point a) to a point b). In this place of constant b)comings, we will need new mental maps, a new topology of the mind, in every new relation. When we change into a new paradigm, we have to re-place things, finding new constellations in a space of different nature.

Consider a song you really love. Think of you listening to it. Imagine it in terms of sound and not in terms of a picture, the sound landscapes, as far as this music takes you. Let us call these places States: States of mind. Transitory places, these states are like stations. We call them feelings. States where the field of the extension, such as an image in a mirror, becomes the field of intensive. Reflex is in-flux. Interior becomes intimacy. Causes become “becauses”. And we are in a constant movement between intensities and status. We are the Reunited States of the Self.

There are places that we build not to dwell within them but for them dwell in us. As if we conceive a place with which we have an umbilical relationship. However, without them, we are homeless. I know… logically, should be the opposite. When the intimate self is too intimate and unreachable he becomes another. When reflected, is the otherness a self?

We went into a game of mirrors and replicas, an alternation game, bidirectional. The goal is to reach the deepest point in the interior of another, as “extimacy”. The need to fill an inner emptiness, the uninhabited place, arises the sense of ownership, an obsession that is difficult to translate to the outsiders, the necessity of feeling someone as OURS. We want to understand and be understood. Knowledge is a reflection, so that the ‘outside’ comes in. To understand is to grasp, to hold. To be understood is to be involved, under the other’s skin. That’s why the skin is a porous membrane. The outside-in. The inside-out. Paradoxical. Where is the mirror? Us in the interior of someone at the same time that someone is within us. The other seeing himself as he is looking at us. When that image of himself is not of a stranger, he feels at home. We re-cognize ourselves and we say us instead of our. For us, the otherness, as an image, is a vanishing point from inside of ourselves every day. It is a universe of new possibilities, of new directions.

More than a feeling, love is the ultimate Alterutopia: a utopia inside of a heterotopia. This perfect place, as all perfections, is an asymptote: aiming for an ideal place, we get closer and closer to the destined place, but we never reach it.

Aristotle believed that although the place is a “property” of bodies that does not mean that the body drags his place with him. For me, it is not difficult at all to imagine bodies dragging spaces. Neither to imagine lost places that will only be re-located with the re-approximation of two bodies. Or three. Or more. Non-commonplaces, but places-in-common. When some distinct bodies are not next to each other, some places do not exist and the bodies have no place-of-body, no place-of-itself. Those bodies feel lost in space, in meaningless movements, in places of no one. We can undo ourselves trying to go back to certain places, but some of those places are no longer there. The ‘we’ is a strange place. We are strange (non) places.

24 years ago they began an identity-otherness dialect, sharing perspectives, dreams, projects, silences, in a common way of existing. Trying to update, constantly, the perspective of the human being, they like to explore Space, Movement and Morphology. They are passionate about Art, in its general substances and disciplines, the superlative sensing: sensibility and meaning. On the way(s) between Architecture and Philosophy, they venture into places without coordinates.