First, there was the map

A beautiful and luxuriant prairie. In the middle of it, a cradle, and three fairy godmothers looking into it.

– So, what do we have in stock for this one ?
– Let me check… there’s not much left. Wait, I think I see something.
– What is it? So far she only received “crooked smile” and “immune system made of cardboard.”
– It’s “curiosity”. Oh! And I’ve just found another. She will want to travel. Those two will be perfect together.
– Ah…
– What?
-Too bad I’ve just given her “poverty” then…

Flash forward a few years. It’s the end of the school year, and children are receiving a book of their choice. Among various subjects lies a treasure: an Atlas.

Maps! Dozen of maps. Funny, beautiful, romantic names to include in stories, reliefs to apprehend, sights to imagine before seeing them for real. Hours and hours of fun. And, maybe most importantly, the roads, binding everything.

Then, there was the road

Feet. Bikes. Great, but sometimes, too slow. Too small a range.
Bus. Train.  Obvious lack of control over the machine. Frustrating.

Eighteen. Finally, driving a car becomes legal. A car means freedom, and roads just waiting for our wheels to visit them. From now on, life will be much more fu-

– But, do you have a car?
– Mmhh… no? But I’ll buy one.
– With what money?
– With money from… well it can’t be that expensive, right?
– That depends on whether you actually want to be able to drive it. And after that, if you want it to keep on running. Maintenance, fuel…
– Oh… that’s a good point. But let me tell you, that’s not romantic at all. At all.
– I know…
– A car would fit the movies playing in my head. Put on some good music, and just drive. It’s like therapy, but way more romantic.
– … that’s it?
– I need a car.

Then finally, one day the car is here, a good CD is playing, and the road is waiting.

No GPS, never ever. GPS is for the weak. Instead, imagination will lead the way.

– So, we take this street until we reach a traffic light, then we turn right, right, left, and… Oh! Look at this pretty hill on the left. Let’s go see it.
– But…?
– Let’s seize the day and get lost forever! At least it will be in a pretty place.

The music is of course very important. At least one new mixtape per road trip. And then, once in a while, shut it all down, stop the car, and listen to the silence.

The people. The road trip can be done alone or in good company. Just make sure everyone is aware of the following: you know when you leave, you don’t know when (or if) you come back.

Maps? They’re only here to stimulate the imagination. You can bring a map of Middle Earth if you like, but not of the place you’re going to.

The sunrays are illuminating the luxuriant prairie. Flowers create a fantastic and vividly colored flying carpet. Little bunnies are happily jumping and smiling and laughing, while a pretty river flows in the middle of it all, sparkles of water covering everything it touches.

But in that idyllic place lies a shadow, surrounding our three fairy godmothers:

– Ok, that’s cool, now she has a car and she likes to drive. How fascinating. Hello, we’re bored here! What happened to the other gifts we gave her?
– Well she still has the crooked smile, and she’s sick at least twice a month…
– Is that it? Will she just drive and dig her car into mysterious swamps and be happy like that? Forever?
– It’s even more boring than watching those cute little bunnies drown themselves in the river. At first it’s fun, but…
– Hey, do I have to remind you that’s it’s your fault she doesn’t travel a lot more? You’re the one who blessed her with poverty!
– Oh. Right. I’d forgotten about that…
– Never again will you bless a child after a party at Merlin’s. You hear me? Never.
– Maybe I can do something about this… Yes, I have an idea. Where’s that computer kid we blessed a few years ago?

The shadow then starts to fade away, as the fairies find a way around poverty. They are so absorbed in their project that they don’t even notice the cute little bunny drowning behind them, desperately trying to get their attention, his little eyes swamped with terror.

Internet gives us countless ways to satisfy our curiosity. Culture is more accessible than it has ever been. The human being tends to be lazy. He doesn’t have to go outside to get what he wants anymore. The world comes to him.

Easy. Too easy. To the point that virtual life is starting to take over all the space in some people’s lives. That’s when it becomes dangerous. Nothing can compare to the feeling that real life experiences have to offer, and virtual life should just be a tool to make us appreciate the real things even more. Is it better to see a piece of art as a resized picture on a website, or as an explosion of color and matter right in front of you?

But not everybody lives near the place they’d like to see, near the people they’ve become friends with. Now, we finally have a way to discover things, to meet people, to learn a lot, to express ourselves a lot more than has ever been possible before. And thus, to take those steps into real life, the one where you can actually touch things.

Internet is a tool, and a pretty powerful one. And what better way to combine curiosity, love of maps and roads, wanderlust and poverty, than Google Street View?
Not all places are available for visiting, of course. There have been debates about privacy, the 9-eyed cars have been banned from some places. But exactly what privacy do you expect when you’re out on the street?

Still, there is a lot to see, and when put in fullscreen, with some good music playing, it becomes the first virtual, and cheapest, road trip in history.

And soon, naturally, artists began to take an interest in it, and used it to create art:

The story of Detroit is often described as an example of what not to do with a city. It was once the capital of the car industry, prosperous and creative (Detroit is the birthplace of techno music and the famous Motown), until growing racial tensions ended up in the most violent riots the United States has ever known.

After that, a bad reputation, population moving away, and the decline of the car industry quickly took over the place, and decay set in. The city then became a strange mixture of modern skyscrapers, beautiful, giant, deserted buildings, and big abandoned houses scattered throughout the place.

A perfect place to explore. That’s where Street View can come in handy, until the road becomes real. 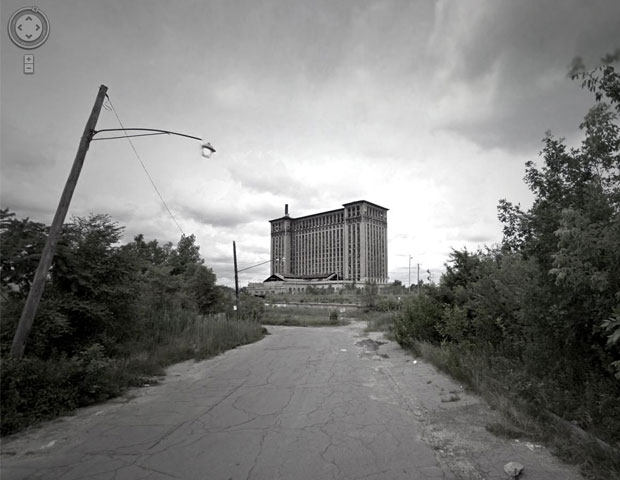 Houses in Detroit are often beautiful. About 10% of those houses are abandoned. That’s how you transform a damaged place into an attractive location. That’s how you end up with such projects as Kevin Bauman’s 100 abandoned houses.

That’s how you end up Streetviewing those streets, and start to feel this odd sensation of sadness and admiration at the same time. 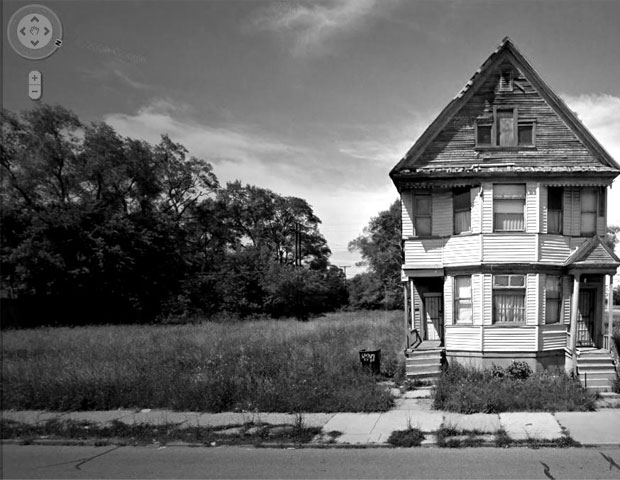 So attractive that it can easily turn into pornography:

“The reason I agreed to contribute these brief thoughts about Detroit for Boat Magazine has to do with the correctness of the editors’ attitude. This issue of Boat Magazine seeks to take a stand against ruin porn. It is everything a ghoulish filmmaker wouldn’t understand. Because I, too, have committed the sin of aestheticizing Detroit’s demise, I’m well aware of the seduction of this posture and, therefore, all the more eager to condemn it now. That’s what this issue of Boat Magazine is about. To see the city of Detroit as it is, today, a beaten-up, beaten-down place of incalculable difficulties, but a place where a half million people still live.”

And indeed, if one gets interested, or even fascinated by the decaying of the city, the least one can do is to pay attention to the projects that are helping it get better.

Part of this help comes from street art.  When the famous Banksy stops by and draws on a wall, it immediatly puts Detroit under the spotlight, and then on the local artists, anonymous or not, who inject life into those walls again. 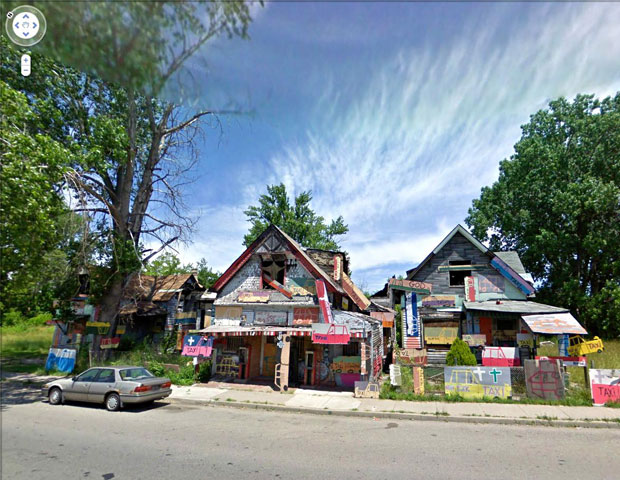 Every city has a story. But Detroit’s story could almost be one person’s story. Once it was a happy child, then the rest of the world started happening all around it, and not always in a good way. Some of those events have left the now adult damaged in some places. Damaged but not defeated.

Maybe that’s what attracts people to Detroit. It’s a human city, and worth getting to know.

Night is descending on the prairie. Sunlight has been replaced by moonlight, making everything even more sparkly, and the river even more dangerous for the bunnies.

Our three fairies are spending the night here, playing Scrabble, sharing a nice bottle of wine , and getting a little high.

– Say what?? She had to live with the donkey’s skin on her so she wouldnt be forced to marry her father ?
– Yep.
– That’s twisted…
– Oh, that gives me an idea: P-E-Y-O-T-L. Triple word: 96 points for me!
– I hate this game. Anyway. What about the other one, the one who wanted to travel, but, thanks to Miss Peyotl and her gift of poverty, couldn’t afford to fly anywhere, anytime?
– She found a way around it. She discovered a place that touched her in a way she couldn’t have foreseen. And now, she knows what the next step is: take a plane, bring her camera, and hit the road. For real.

This technology, developed by Google in 2007 as a feature for Google Maps and Google Earth, is part of the company’s enterprise to map and document the world. It provides users with a 360-degree, street-level photographic view of neighbourhoods around the world. Users can zoom and rotate their orientation, simulating an immersive virtual reality experience. A vast area of the world’s urbanised land surface has been made available through this technology to date, and can be viewed in most internet browsing devices.