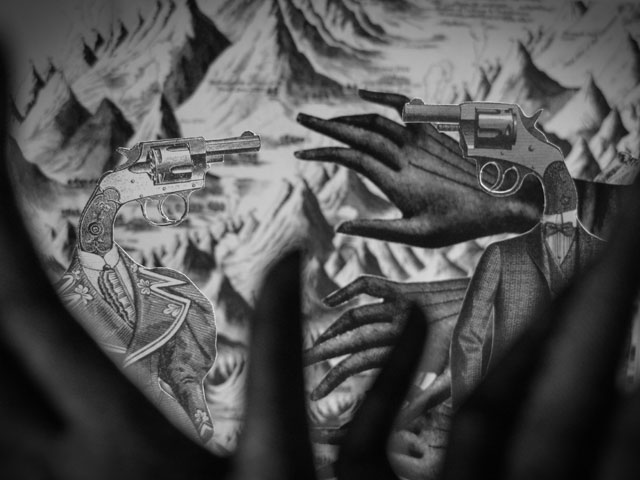 A lexical crime has been committed. Double has disappeared without a trace, and a strange look-alike character named Doppelganger has taken on his identity. So uncanny is the likeness that few have noticed anything is amiss, and he walks among us with impunity.

This is a case I would love to investigate, but lacking the etymological and sociological authority, I can only speculate and make a few inquiries on the side in order to build a case against Doppelganger…

Let me begin my inquiry by asking, what is this word for?

Was its modern use forged by some influential individual so acutely aware of a widespread phenomenon in need of a buzz-word? Or was it just because an old tired word had to be replaced to bring some freshness to an existing concept?

I suspect the latter.

Doppelganger is German. Doppel stands for ‘double’ and ‘gänger’ for goer or walker. It has been double-walking around for a while and we have seen it being used – with variable degrees of semantic abuse – in the media. Most people have come to regard it as a more erudite alternative for ‘double’, and it is now becoming more popular than ever.

If you are a Facebook user, the chances are that at some point, you must have noticed the profile pictures of your friends change to those of look-alike celebrities. Chances are that you too joined the wave in what was known as doppelganger week.

Finding your double was suddenly twice as exciting: “Unbelievable, that’s my doppelganger!”. The old ‘double’ was tossed away behind the line that separates generations and hype from the rest.

I think this has been a pivotal event in the usage of the word. It is my impression that since then, the use of the word has become increasingly common and widespread. Have you noticed the same?

I also have the feeling that for many, doppelganger week was the first exposure they had to the word: it was obvious that it was here to stay, so you thought you’d better learn it and plug it into your vocabulary.

So, you sorted it among the most recent terms you have learned, in a slot between ‘entrepreneur’, ‘douchebag’ and ‘tramp stamp’, wedged in alongside the old ‘double’ because they both mean the same, right?

But is doppelganger, in its original sense, really just a double, a look-alike?

A double is a double: twice of one, one human being holding a striking resemblance to another who is far away on the genealogical tree. It is as if nature’s genetic algorithm failed in its promise of infinite variation.

I’m sure that everyone, at least once, has seen an anonymous celebrity wandering around. Sean Connery used to buy cigarettes around the corner to my place. More than once I’ve seen Nietzsche’s moustache wandering around the place, and one day I even spotted it with all its glorious fluffiness slapped on a matching face.

Personally, many times, friends passed by not recognising me on the streets of a foreign city. For others, I have been that backpacker they met on a train, some girl’s long faded out summer love in Spain or that tragic friend from childhood that if he’d had the chance to grow up would have looked just like me. These are the doubles. The uncanny resemblances created by a faulty machine that was designed to never repeat a product. The word reminds us of this glitch that strikes our wonder.

To me, though, the word ‘doppelganger’ has a darker meaning that is obscured by its modern popularity. Let’s look at some files.

According to Wise Geek:

A doppelganger, also spelled doppelgaenger, can be the ghost of a living person or any other sort of physical double. The idea of a doppelganger is sometimes similar to that of an “evil twin.” The word doppelganger comes from the German Doppelgaenger, literally meaning “double-goer.” There are many different types of doppelganger, as the definition of the term has become somewhat loose, encompassing any sort of double. The doppelganger may be ghostly or appear in the flesh. It may be an “evil twin” unknown to the original person who causes mischief by confusing friends and relatives, or it may be the result of the original person being in two places at once through an act of sorcery.

And more succinctly in the Urban Dictionary:

Someone that looks the exact same as another person. yet not a twin. ghost identical to living person: an apparition in the form of a double of a living person

Both definitions hint at more than simply a synonym for double. So why have we latched on to such an elusive word?

Was it because we couldn’t be bothered to borrow another word from the Pacific Islanders like ‘taboo’ or ‘wiki’ or maybe the onomatopoeic expressions didn’t have enough ‘oomph’?

What is certain is that any word taken out of the Greek vocabulary would sound old from the start, and if French, dejà vu. So, German, being so ‘uber’ cool these days, was infinitely more zeitgeisty! And it was already there at hand err.. tongue, wandering the mean streets of the ‘double’ neighbourhood dragging all of its semantic luggage behind itself.

A double is something familiar in the sense that it is another you, made of the same matter and to whom you can relate in a worldly manner. A doppelganger is of another nature. It is a glitch of your being, an unnatural and ghostly duplicate of your person that you can’t be sure exists.

Actually, reported experiences make it sound more like an event. An anomaly, a disturbance that occurs in extraordinary circumstances rather than a separate entity with an existence of its own that is always out there somewhere waiting for you.

Like a ghost, it is reduced to a reminiscent and precarious existence having lost most of its corporeal attributes. Unlike a ghost it is not bound to a place or to a past event, and it has purposes other than haunting. Some view it as a vision, others as a sign, an omen. Others even attempt to study and reproduce it in the laboratory.

For me doppelganger will always be associated and reserved for this kind of more spooky and fleeting experiences that are hard to name and could very well be tied together by this word.

Calling someone – real – that looks like me my doppelganger still gives me the shivers. Too sinister to be used just for that.

I rest my case.

Graphic designer, illustrator and a curious mind, Eduardo is the founder of the Cyclictone project.

Monica works across illustration, design and directing, with a combined creative knowledge. She studied Sound and Image, and followed it up with an MA in Communication Art & Design at the Royal College of Art in London.

Having shown her work in London, France and Portugal, she was selected for Europe’s Young Creators Biennale in the field of video. She recently won an award for her co-project at the Annecy Animation Festival by Folimage Studios, Canal+ and National Film Board of Canada. She currently works in cinema and advertising.

In illustration she is represented by Who Agency (Portugal) and Napa Illustrations (Finland).