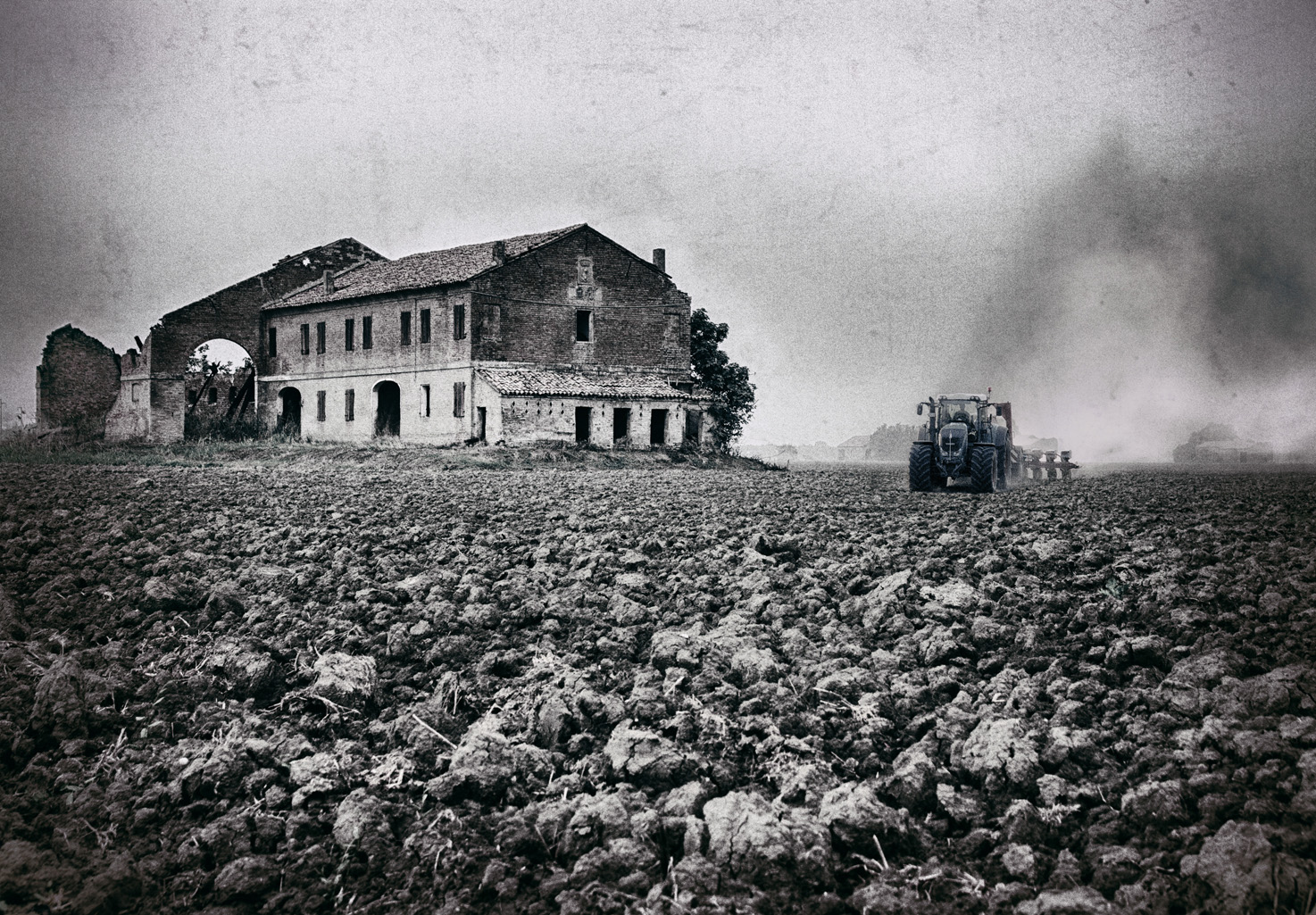 Did we ever respect the land?

We often think that modern men, “us”, are the key to a modern problem we started a century ago or so by behaving badly, using too much resources, thus creating all this “Global warming” state of things, extinguishing species, acidifying oceans. The truth is, Man has always been like that. He has always loved to extract resources from Nature to build his own things, whatever the cost was to him or to others. Man loves things. He has always loved things, and killed many of himself to have more. Proud to make his own system. An improvement of the messy, archaic, fucking Nature.

When Man started to be the man we know, the one who removes nature from the land to serve his own interest, that day Nature became his bank. Yet, it didn’t happen in one day. Before that, there were billions of years. Man at first had barely learnt to use any tools, and for a long while he didn’t took more than he gave back, as all things in Nature do. For a dead mammoth, there were plenty of dead men killed by saber-toothed cats and theirs fellow ancestors. Man was part of a system he hadn’t created, and then he started to create his own.

We began to take more than we gave back. It was very long ago. We started contracting a debt. From this time, we borrowed from the land, more and more, expanding suddenly in every direction.

We don’t like to hear that, or only in a very perverse way. Man is bad. Man is destroying it’s own land. It is its own Nature to do so. To say it out loud is an act of contrition. And with those acts of contrition, of course we hope for absolution

Still some of us begin to be scared. If you are able to take a few steps back, you can see how deeply wrong things are, on a massive scale. This is what we do to the Planet. The hot topic seems to be about the harm we do to it. Which in a way is plain stupid. If you pull back as far as you can from the situation, taking the biggest scale you can into account, what is coming is not the end of Earth, not even barely, it’s the end of us. Maybe not you, maybe not me, but the end of what we think “we are entitled to”. We think it’s all there forever, because of all this technology all around, it looks very powerful and safe, we seem to have many cures for many things, we often found solutions to massive problems. And we think “it’s ok, we will figure this one out, let’s not eat this Burger, let’s eat some bio vegetables, grown less than 50 kilometers around, but I do need my I-Phone 4S”. And maybe you are very proud because you don’t have that one, the truth is you have many other crap. And it’s too much

But instead we go on with our daily lives, because it’s too complex for our brain, we sometimes stop for a while, and argue, is Jared Diamond right or wrong, can a ecocide happen or not ? Ecologists? Naïve people. Science will prevail!

And did we find any solution for this, Man’s hunger for things? Ever? The truth is we didn’t, some people just made it through and today all of our system is very much fragile, because of the scale of what we borrowed and the complexity our system has evolved into. Either we will reset the debt by war or it will reset by itself, meaning the state we put our environment into will get us until we are back to a decent balance.

It is time now or tomorrow, not only because we are more aware, because it is time. We used to say, in what state will we leave the world for our children? Now we are the children. If we live long enough, we will see it start, it already has. There is no doubt about it.

From this, we seem to react in two ways, both avoiding the problem. There are those in denial, who see the melting of Antarctica as another challenge for science, plastic continent as something to be dealt later by some other people. They see 3D printers, and such progress as a hope of something. A better, more well behaved society. Then we have those you will assimilate to me, survivalists, pessimistic ecologists, announcing the end of everything.

And it might seem dark, it’s absolutely not. For as far as we had knowledge. We knew. Everything in our known universe appears, even with a bang, grows, expands beyond imagination, thrives, stagnates, crashes, everything you know crashes one day, from stock exchange, to nuclear plants, from civilisation to species, from universe to life, it will crash, part of a small or a big cycle, but it’s part of a cycle no matter what.

And a new system appears from that, always more complex than the previous one. That would be the first law of Nature in my opinion. You can believe in anything from God to nothing, it’s the same thing, the one and most powerful rule, our universe produces life and it will always get more complex than the previous cycle. Life, as a more general meaning of things getting created.

Should we be scared of that, of everything crashing? Of me and you starting to pay the debt for us and all our ancestors? Absolutely not, we are given the opportunity to be in the middle of something central, the tipping point, we may die the day before it all crashes down, and it may take centuries, there are chances we may live through it. Now is the time before the decadence. Only one of many before.

Our civilisation is just one of many, before and after us. Would the planet be mainly infertile for billions of years, that would just open space for the next thing. And human is a tough motherfucker.

Now what are we in the middle of this? If Man has a place in a new system, he will have to pay his debt for thousand of years without starting borrowing again to his land more than it regenerates, this Time will have place for people giving back to the land. Back inside a system we thought we weren’t part of anymore. Far from what our brain can intellectualize today, because it will be new.

It’s something we can’t really foresee, I’m already too far in it. It won’t come the way we expected, it never has in history.

We ask ourselves, what can I do, to stop all of this? You can’t, a drop in the sea can’t start reimbursing a debt contracted for billions of years by billions of people, it will be the same thing with the debt of our governments, too little, too late, you don’t pay a student lawn or your home by starving to death. And it’s not even the question. The question is how are you living today?

It is possible to start living in a new system, now, not in a day or two, but in the following years, and you should. Your own system. Respecting the ones that are respecting you. On the edge of all things. Don’t build a shelter, don’t hide yourself, if there is war run away where there is not, defending what is not yours doesn’t make sense.

There is nothing scientific about it, nor is it a story of some sort. I don’t know of people that are agreeing to this. This is just what debt means to me.

This the way I see the Universe.

I like to think anonymously, and rarely share my optimistic way of thinking. Cycles, Conceptualization of the Universe, Chaos Theory, and thinking how Humans will live through the end of our civilization are themes I enjoy to learn about, write about, and play with. Big subjects. Humble thoughts.

Collin is a German photographer whose passion with the camera dates back to the analogue times of his youth. He published some pictures then but never made it his profession and slowly lost interest due to the technical limitations for amateurs in this era. This, however, changed dramatically with the introduction of digital photography and the internet.

The great and unexpected response to his Flickr portfolio pushed him back on the track of serious artistic and semi-professional work.

“Freed from technical restraints and unburdened by economical considerations I can finally pursue the art of photography but for its own sake. I feel very lucky.”