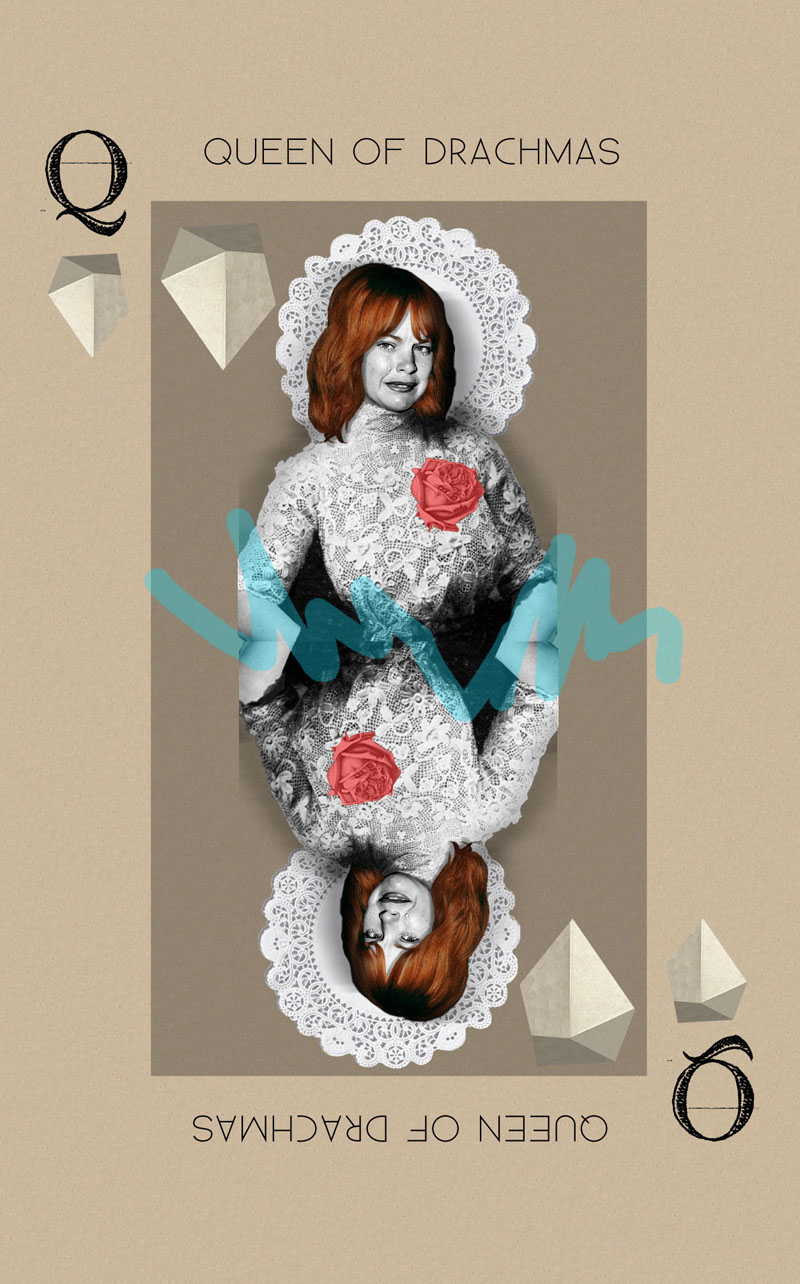 There are men with lion heads behind cage bars and a skinny child wearing a “I Love Life” t-shirt the good old American style.
An anarchist dog, as they call it, walks past the police, blocking the way to protesters and other dogs… According to Parliamentary sources, some dogs have been poisoned. The same European Parliament which has got into a blindfolded sexual game together with a German dominatrix (who does not stand for Germans) has ignored the fact that the disappearance of some of the dogs is due to starvation rather than poisoning; the kind of starvation that prevents a dog from getting its primary diet.

Everyone has something to say about Greece and debt: some say they can save themselves by leaving the Eurozone, some think they should ask for some more time in order to pay the financial amount, while others are certain that Art will be their only salvation.

The Greece of Theater. The world’s amphitheater: Aristophanes, Homer and Plato, Gods and semi-Gods: all known characters, yet… The heroes and heroines of Greece – the same country North Americans, Spanish, Irish and Portuguese claim not to be – are the ones neither being published in magazines nor attending FMI meetings, arising in battlefronts, fainting with tear gas and burning themselves to death, to avoid digging through trash cans and loose their dignity to feed themselves: they deserve a statue, these days.

The Queen of Drachmas appears as a collage standing up from a 20 floors building next to the Syntagma Square, where you may read “Prime Minister wanted – dead or alive – doesn’t have to have brain”, written on classic marble.
From Le Monde Diplomatique to the local digital newspaper (sold at the kiosk where a Tunisian has been living for the past three monthes, without water or spare clothes), from all those pages containing images of those who have made an appearance in the show business to claim a life, hundreds of facial expressions and body parts have been cut.
A group of artists called “The Humanizer” have claimed the eyes of an actress working at a bar, the hair of a manicurist who sells her body in the suburbs, the tear of a fisherman who sold his boat and now drives a truck, the Kyrillos’ birthday cake trivet and a child who died waiting for medical assistance… all because of the crisis.

EVERYTHING IN THE NAME OF CRISIS.

It is also in the name of the semi-God’s descendants, who handle this fight and refuse to die kneeling down, that The Queen of Drachmas claims the past before the Euro, before the illusion… presenting herself in the shape of a playing card; a poker card which, while providing us with fortune and endless sex nights, might as well dump us into a bottle of plain vodka.
The most surprising thing about this queen, although her diamonds could draw anyone into a tragedy so Greek as Portuguese, Spanish or North American, is her majestic look. And even with a tear dropping from her left eye she poses from the 20 floors building, offered to the world, for who wishes to take a picture. She is Greek: she is made of pieces from all Greeks.

I am also Greek and I want Monarchy back in Greece.

P.S: This text has been written under the fictional and documental laws… Not advised for insensitive people, earning bigger wages than any.

Regarding my art (illustrations), I suppose it’s only a part of what I am. I don’t illustrate everyday, unlike every other illustrators who draw consistently. That is why I don’t know if I can be considered an illustrator. In any case, sometimes I really need and have the urge to translate some emotions into an illustration.

I also like to write and compose music with Garageband

At the moment I work full time at a book publisher editor in Porto, as a graphic and book designer.

I am also taking an MA in Graphic Design and Editorial Projects at Faculdade de Belas Artes do Porto. I guess you can translate what I do as making use of the various tools I have mentioned to evade/ express myself the best I can.