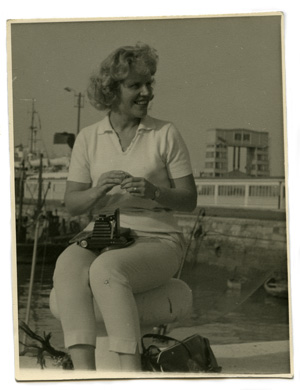 You will, I hope, forgive me the boldness of writing so, when you are no doubt grieving and we have not met, nor have I any reason to believe you are aware of my existence.

I am an old acquaintance of your mother and have recently come to the knowledge of her passing, last August.

I would ask that you kindly accept my deepest condolences on your loss and that of your family.

It is now more than fifty years since your mother and I last met and we have not spoken or corresponded since, but I can say that hers has remained the fondest of memories.

We met in London. It was 1937, I was 20 years old then, studying at King’s College. I recall I met your mother at what was then a popular dancehall in Pimlico. The kind of place neither of our parents would have willingly approved of I’m certain. I believe that first day she told me she was 21. I soon found out that she was in fact 17.

She was an apprentice seamstress then. After that first encounter, we met more and more frequently.

I graduated in 1938 and found employment in a local newspaper in Angel. By then we had become closer. I must say, in all honesty, that these and other aspects of my life were not to the best liking of my parents, well stationed as they had been in life.

Shortly after the war broke out, my father, knowing of my wish to join, obtained for me instead a position in the War Office, as a correspondent – which I accepted. Foolishly perhaps, budding writer that I was, I wished very much to be of part of the events unfolding then on the continent. We separated in January of 1940. In March I left London to cover the war in France.

I went on to cover the whole of the conflict, in the process establishing something of a reputation for myself. In the years that followed the war I devoted myself completely to my writing, not least perhaps as a way of dealing with the past. I started writing under a literary pseudonym and eventually became what one might consider a successful writer, indeed, without any boast, a famous one.

Through friends, I had known of your mother’s evacuation from London in 1941 and her eventual marriage to your father.

I have lived many lives since, written many books and only once returned to England, to attend my father’s burial, some ten years back. As such I have never had the opportunity to visit, consumed as I have been with my work, with myself.

It goes without saying I am an old man now, older than my years would account for. Upon hearing of Elisabeth’s passing I was taken by a deep sense of solitude and by what I can only describe as a clear awareness of my own near demise, coupled with a clarity which is perhaps granted to those who, having lived and seen too much, near the end of their term reacquire a measure of innocence. It was following this that I decided to write to you.

Together with this letter you will find two things: a picture and a notebook.

The picture was taken in the spring of 1939, in Hove, where your mother and I spent some time at a friend’s house by the sea. I remember those days as some of the most serene and beautiful in my life and I believe she was equally happy then.

The notebook is what you might call a diary, although it has been condensed over the years so I will not dare call it an autobiography.

I would wish that you may accept it as a gift. If you will call it so or not is something which is beyond my power to judge. It was in fact written for you, I now realise. If I am to have at this time any hope, it is that you will find in it something of worth.

As I cannot rightly expect that I am anything of significance to you, you may of course do with it as you will, as it is yours to dispose of.

I hope you will pardon me any harshness in word if nothing else.