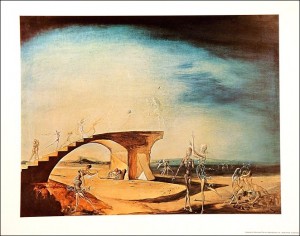 This story begins in prehistoric times, probably with an accident. A tree falling across a river, making things suddenly easier for men to go further on their way. Giving them the idea to redo it later.

This is evolution. And evolution applies to many domains. Make contact with something opposed, or at least no so close, discover it, learn about it, use it as a tool, and finally add something new to the world.

More than an object, the bridge is a concept, a link between ideas, between people. It is associations helping find solutions, it’s a new path leading to discoveries.

And this is obviously also an important part of artistic creation. Whether art is the result of a connection, or the bridge itself, it is always interesting to see what it can bring to the people and to the world.
And there are many, and various examples.

Nightmares alone can be the trigger to a very creative work. So are dreams, and eveything that surrounds them. The concept of surrealism, the artistic movement founded by André Breton, is the perfect illustration of it. Using psychic and unconscious forces as a creative tool, it allows artists to free themselves from any boundary or control that would prevent them from expressing what’s inside their mind and bring it to reality.

After Breton’s death in 1966, the surrealist movement was declared dead. But of course, such a powerful idea has still a huge influence on modern art. Even if “influenced by” is not to be confused with “surrealist”.

Greg Drasler‘s work has been compared to surrealism, although it is set in the modern area, and doesn’t focus on the lack of control the movement demanded. But the fanciful universe where his art stands could qualify him as a neo-surrealist:

Speaking about reality. What happens when those who create also live outside of our society? By choice or by accident, they have ended up in the streets. Being homeless, surviving is obviously the priority. At first sight, there is nothing to think about but reality. But doesn’t such an alienating situation also create the need to escape it somehow?

Herbert Freeman lives in Orlando, and is a painter. What matters to him is that those who buy his work really get it, and don’t buy it out of pity. So he meets them, and speaks with them about the meaning of the paintings, establishing a connection that benefits both sides.

St Elizabeth’s hospital is not a common place. Inside of it live criminally insane patients. The kind of people that society hides away from the outside world because so far, it’s the only way it has found to deal with them while not putting the others in danger.
An art program helps those persons become creative and perhaps exude their feelings in a way they’ve never imagined before. It also gives the world a chance to see them in a new light, through their pieces of art. A link between the inside and the outside.

How could sound and silence connect? Maybe through art. Silence have been a part of music for a long time, inspiring more artists than one could think.

The first song of Mark Hollis‘ eponym solo album starts, boldly, with 18 seconds of silence. Following them is one of the most delicate songs ever made. And those first seconds certainly count for something in the power of the music. It gives it a new depth, helps every note stand out even more, and makes it unforgettable.

When it comes to build bridges, art can be the tool, or the result of the connection. Sometimes it is both. Those links are useful to creation, which is is useful to society.

And sometimes, the bridge takes the form of a popular mass media, and connects a true genius with the rest of us, mortals.