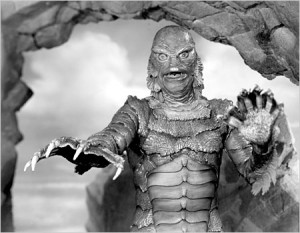 Once upon a time, during a hot summer night, a theater was organizing an old horror movies night. A pair of paper glasses was distributed. The lights went out. And suddenly, a creature from a black lagoon started walking toward the spectators. Out of the silver screen.

Out of the silver screen!

What a nice first encounter with 3D.

Nowadays, when hearing the term “3D”, people tend to think first of some blue creatures, or noisy creatures, or even little creatures hungry for girls in a bikini (yes, it’s a concept).

But this is only a part of a whole new world, full of possibilities. 3D is now used in almost all medias, in architecture, design, and also in more and more artistic creations. Here are a few examples.

Timothy Bird likes theatre. He is also interested in 3D technology. But he’s not really fond of 3D glasses. His company, Knifedge, designs, among other things, theatrical sets. And because he knows that before 3 comes 2 (Ok, this doesn’t make sense. But the rest of the sentence does, don’t leave), he maps 2D projections on the stage set, instead of projecting them on a flat surface. And as he says: “This gives the projected images a 3D quality without the audience having to wear the glasses, which would kill the theatrical experience.”

Shaka paints in 3D. Sculpting directly on the canvas (or the wall), he creates a link between the subject of the painting  and the spectator. It’s the exchange of glances from both sides that makes the dialog. 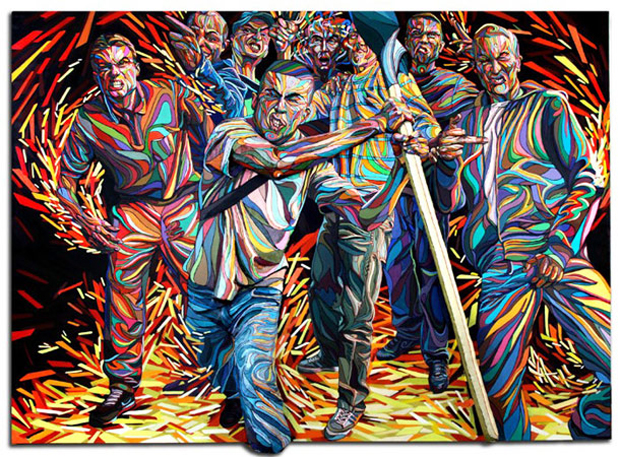 Mixing 3D animation with classic footage is also more and more used in music videos, and when it really serves the story, the music and images take us to a whole new level.

(And then, the making of)

Another cool thing about 3D is that it doesn’t need to be obvious to be impressive. It can even look handmade. The opening sequence of the critically acclaimed show Game of Thrones proves it beautifully, mixing Leonardo da Vinci’s inspired mechanicals with the medieval/fantasy universe the story takes place in. A splendid introduction for one of the best tv shows:

3D is a concept. It means a lot of different things. It’s this diversity that makes it so interesting. And if we don’t know what will be the next idea, we can already enjoy the existing creations. For example, a new horror movie.

The 2D version of