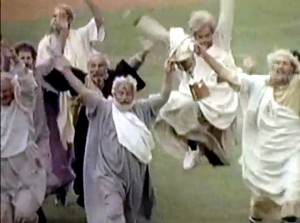 Olympics are in the air. Olympics are everywhere. Some won’t miss a minute of it, while others just want to run far away.
But let’s be honest, most of us could never outrun people built like THIS.

The four hours long opening ceremony has proven it: English people are not afraid of light, music, sparkles, fire, crowds, the Beatles, or Mary Poppins.
Then why not extend those ideas to the disciplines represented in competition?

Technical constraints are no longer an excuse. People can ski in Dubai, remember?

With no constraint, there’s no limit. And jumping has never looked so good.

London has no moutain and no ocean, true. But it has creative people. It will just take a little digging under the Thames to get this guy around (and maybe bring Cthulhu back):

No waves available, either? If all those who participated in the opening ceremony were given a fan, they could probably do something about it.

Cycling. It could something else than pedaling in a velodrome really, really fast. One can also jump…

… and still sweat a bit.

Like we said, they can ski in Dubai. So, there is no valid excuse not to see this in London:

(The Art of Skiing ~ Extreme Sports)

English people, you can make this happen. We’re counting on you. Remember, you were the ones who started with silly ideas…