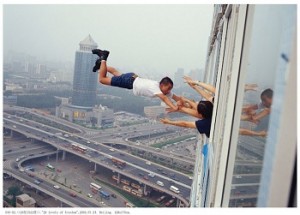 There is a difference between going through a dangerous situation, and willingly putting ourselves into it.

The success of activities such as skydiving or bungee jumping proves that danger attracts (some) people.

But it can also serve artistic purposes, among others.

Whether it’s for personal, political, or sociological reasons, what’s going through those artist’s minds led them all to risk their lives, though in very different ways.

‘I am fascinated by the unstable and dangerous sides of art and I hope my works reflect these aspects.’

Li Wei has a message. To make sure we receive it, he works with his own body to create impressive, gravity-defying performances. Sometimes he uses safety harnessess… sometimes he doesn’t.

When Marat Dupri bought his camera, he decided he would shoot nice landscape pictures. Feeling it might have not been the most original idea ever, he started to spice things up by climbing up higher and higher structures, using no safety at all. It surely added a spectacular dimension to his photos, and earned him the name of “The skywalker”. Quickly, dozens of people followed in his footsteps, trying to get the most incredible views. The fact that they might die any second doesn’t seem to bother them at all. But Art seems to have been lost somewhere between the ground and the sky. 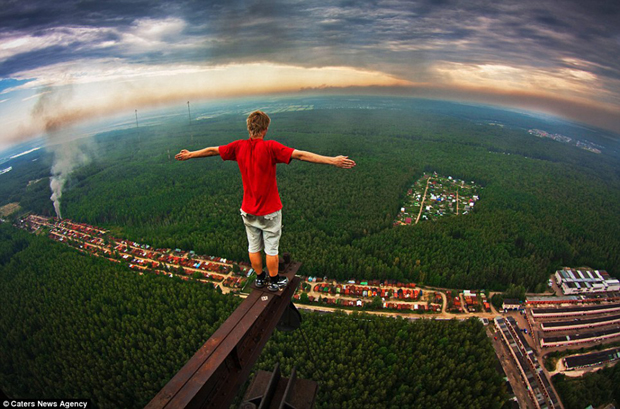 Jim Reed has always liked the rain. He also likes the wind. The snow. The blizzard, tornadoes, ice storms. He has a thing for floods, too.
Jim Reed is an extreme weather photographer.

Tim Hetherington has put himself in extremely dangerous situations for the last ten years of his life, before he was tragically killed in Lybia last year. Covering wars all around the world as a photojournalist, not only did he show his vision of man suffering through photography, but he also wrote books and co-directed the highly praised movie Restrepo, along with Sebastian Junger.

“Diary” is his personal testimony of the years he spent going through wars.

Sometimes they use safety harnesses, sometimes they don’t. They might have a political purpose, they might just want to have fun. But the one thing those artists all have in common is their fearlessness, which we can bet made them feel more alive than ever.