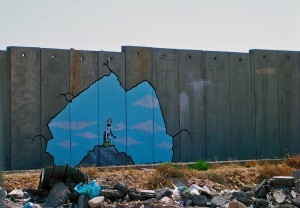 History is dotted with conflicts. Freedom, territory, religion, Men always find reasons to fight against each other. Some of those fights have been going on for so many years, it seems like there is no solution.

But life goes on, no matter what. People have to find ways to live, even during troubled times. They have to deal with the problem. And sometimes the problem is between two communities.

So they build a wall. Which quickly become a new enemy to fight. And the loop is looped.

It is one of the most delicate and complex subjects in History: The conflict between Israel and Palestine. Tensions, attacks, and regular fighting have led to the creation of the Occupied Territories, gated lands separating Israeli from Palestinians.
Face 2 Face  is a project from street artist JR. By not taking side, he reminds us that human people live on both sides of any wall, and that yes, it is possible for them to communicate. Today, through image, maybe tomorrow with words. Including in Israel and Palestine…

One of the longest walls is the Mexican / Us border, running from the Pacific Ocean to the Gulf of Mexico. Guarded by the army to prevent Mexican immigration and drug traffic, and documented by many artists through times.
Smogranch  grew up near the border on the US side, and has been photographing it for years. Here is an example of what he witnessed, and how he felt about it:

Being held hostage by their own banks is not the only thing Cyprus people have to deal with. They already have the Green Line, separating Turkish Cypriots from Greek Cypriots, and making Nicosia the last divided capital in Europe since the dismantling of Berlin’s wall. So, why is it here? And why does it still stand?

Separating North Korea from South Korea is the (in)famous DMZ . Astrophotographer Kwon O Chul realized some shootings of this wall and the timelapse gives us a new perspective on the ironically most militarized demilitarized zone of the planet. When even time and elements move on, but a conflict stagnates…

In Belfast, the oddly named Peace walls were built to separate Catholic and Protestant neighbourhoods. Walls, supposed to bring peace between representatives of two different religions. By separating them so they can’t communicate. So many wrong things in so few words.
Sound artist David Drury managed to capture the place’s atmosphere, by listening, not only to people, but to life itself.

It is Europe’s most famous wall. It was destroyed on Nov. 9 1989, after 28 years splitting Berlin in two. There is no more wall, but there are memories. The East Side Gallery is one of their most famous supports. In 1990, 105 international artists came and painted this remaining piece of the wall. They documented History this way, and while it reminds us that it’s always important to remember our past, it also sends a message of hope for every other part of the world going through the same kind of alienation.

Sadly, some still don’t get the importance of memories, and would rather make money:

All around the world, walls. Built for different reasons, held by different people, they still have something in common: they inspire artists, and raise some pretty simple questions.
Are they a solution, or just a way to blind ourselves?

Do they separate people, or make them care more about each other?