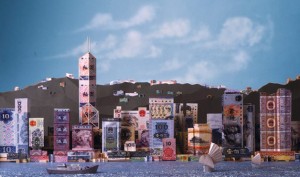 It’s all around you, wherever you look, whatever path you take. Even if you don’t recognize it right now, you know you will soon enough. You know they will be here, there, everywhere.

The people. The buildings. Noises, colors, odors. They don’t ever go away, not even in the deepest of night.

Essential and lively for some, oppressive for others, cities are now home to half of the people on the planet. Switching from rural life to urban life didn’t go without some important adjustments.

But as always, some of us have been able to capture, show and tell the world what being, or living in a city, means to them. And to all of us.

With a population of more than 8 millions and constant traffic, Iran’s capital Tehran might appear as an epitome of chaos and confusion. But to Iranian artist Aliyar Rasti, it is home, with all the warmth, feelings and sensations this word can carry. And this is Aliyar’s home:

Speaking of chaos, have you ever been to Paratropolis?
German artist Alexander Biserama Becherer has created this huge reduced model of a megalopolis, where the buildings are made of words.
Thousands of hours of work have given birth to this impressive sculpture, full of complex details, where entangled pieces and meaningful words represent the chaos and the sound of an oppressive (and oppressed) city.

A city is nothing without its citizens, and Hong Kong has some of the most crowded neighbourhoods in the world. Some became almost legendary.
The result of this can be a dream, if you’re a photographer looking for an impressive urban seeing, like Michael Wolf. Having been living for years in the Chinese city inspired a lot of his work.
The stunning series, Architecture of Density plunges the viewer inside the city. There is no ground, there is no sky, there is no way out, it’s impossible to breathe. It just never ends.

One of Michael wolf’s recurrent themes is about seeing what people’s life is like. He likes to catch glimpses of truth with his camera. The work of Benny Lam could be seen as the other side of Wolf’s series. Except instead of showing us density from the outside, he leads us inside the famous tiny cubicles that shelter thousands of families, living in some the world’s most expensive rooms.

The more recent is its construction, the higher a city gets. The image that commonly comes to mind when picturing a city is a skyline. Subject to many interpretations and of many diverse representations.
From the sharpness and rigid, metallic angles of Peter Root and his staples buildings:

To the mellow (but potentially destructive) and full of light gelatins from Liz Hickock:

Cities can be looked at and thought about by so many angles. any quality or flaw can be found inside them. They come from a dream, they grow, get erased, reconstructed, reinvented. Small towns getting progressively eaten by megalopolis; suburbs, replacing nature:

We don’t know what cities will be like in the future. Will there be giant structures like the ones Robert Silverberg imagined in his dystopian world? Or will Nature take back its rights?
Only one thing is certain: they will reflect Humanity as it evolves. And there will be artists to look at them, love or hate them, and show the world the many sides of the story.