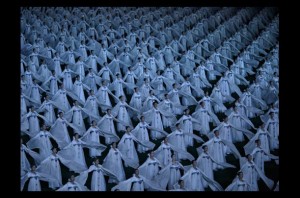 If it were, it would probably be entertaining and lead to an interesting reflection.

But it’s reality. It’s happening, right now, next to us. Just like that, entertainment is out, and reflection matters more than ever.

The less we know about something, the more fascinating it becomes. But what happens when “something” is a whole country?

Art has often been seen as a liberator, a way to convey important messages through History.

But what is it like, being an artist in a secluded and over-controlled environment? How can someone use Art as an instrument of rebellion when they have never been exposed to rebellion?

There is a very revealing image about the Democratic People’s Republic of Korea, commonly known as North Korea. It was taken by NASA’s Satellite, and it is actually a brilliant metaphor of the situation. This image represents Both Korea, South and North. The North people are, literally, in the dark. The capital, Pyongyang, is merely lighted. The rest isn’t, at all. 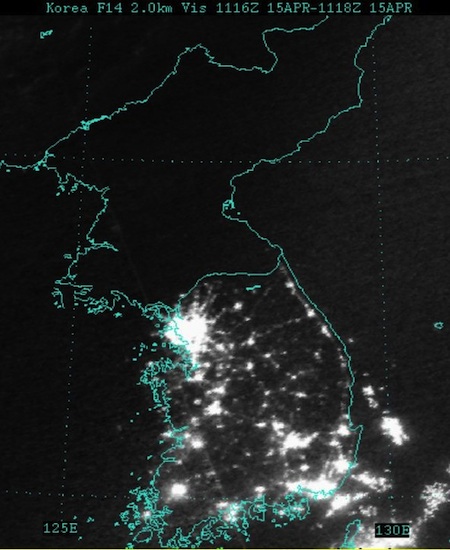 Recently, Google’s frontman Eric Schmidt went to North Korea to meet its leaders and discuss new technologies. He brought along his daughter, who, in her blog, explained what the trip was like.
In one of the pictures she published, we can see one of the forms which travellers have to complete before entering the country.
Along with the options “killing devices” and “drugs”, people are asked if they carry with them “historical and cultural wealth, artistic work”, and “publishing of all kinds”.

Another kind of weapon. 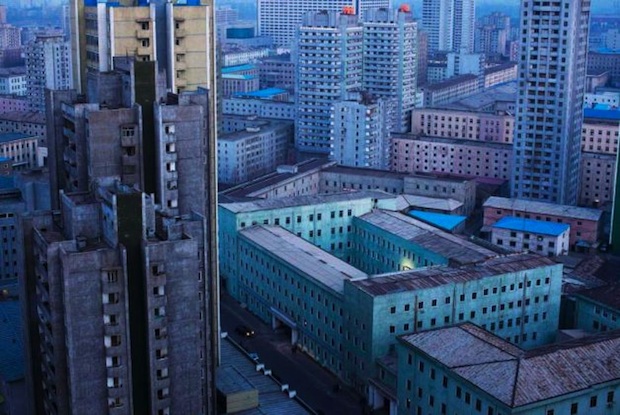 It is difficult, if not impossible, to understand how one lives in North Korea. In a country where Nation is the most important value of all, being an individual with a conscience is not an option. Let alone being creative.

The government authorizes artistic expression only if it celebrates the country, its Great Leader, its Dear Leader, or its Supreme Leader.

When reality is sometimes distorted for artistic purposes, DPRK takes this notion on a whole new level. The distorted reality (or complete fiction) is served as Truth for the citizens. It is only truth they will ever be allowed to learn and believe.

So, what’s Art like in North Korea? The Arirang Festival gives us a glimpse. The gymnastic and artistic festival held in Pyongyang is very careful to present a perfect image of the country. Citizens are chosen based on their skills, to tell a story where mythology and reality become inseparable.
The spectacle we get to see is technically perfect, visually impressive and beautiful. Presented by the North Korean government itself, it sounds great. If only it wasn’t so disturbing.

Daniel Gordon and Nicholas Bonner obtained the right to follow a few of those performers for their documentary A state of mind, as they are rehearsing the performance of a lifetime for their Leader.

While the world gets music and dance, citizens of North Korea are also told a tale, since childhood.

These images are an example of what Art North Korean people are exposed to. The symbols here are simple:
- People are happy and working hard.
- They are happy because for three generations now, they’ve had a Leader (represented by the color red and the flame) to protect them.
- They have to be protected because the country is under constant threat, the worst enemies being the Americans, The Japanese and the South Koreans.

And no matter how huge is the gap between those images of happiness and their own persecuted and starving life, they believe them. It’s not like they have a choice.

Song Byeok speaks no different. Born in Hwanghae province, the artist became the only kind of painter he was allowed to: a propaganda painter. He wasn’t unhappy. In line with what he had been taught since childhood, he believed in the superiority of his country, and in the (almost supernatural) power of the Leader. But like everyone else in the country, he was starving. The only reason for him to leave was to find food.

But you don’t leave North Korea when you’re a simple citizen. Showing any sign of rebellion will only lead you to prison. As in camps.

That’s why the painter escaped to China, and then discovered the outside world. For the first time, he could paint what he wanted. And he chose to distort the already distorted reality he had always known, by adding humor and,  finally, truth.

On the silver lining, deep inside all the propaganda, is also a slight (SLIGHT) allusion to the fact that change and innovation can be a good thing.
After the Korean War and the following self-confinement of the country, economics started to decline and led to a devastating famine, still happening nowadays. A country needs to evolve to be able to reconstruct and rise from ashes. Even a self-absorbed dictator can see that. And the mere idea that change is good, might also be a window slightly opening on the future. Then, on the outside world. 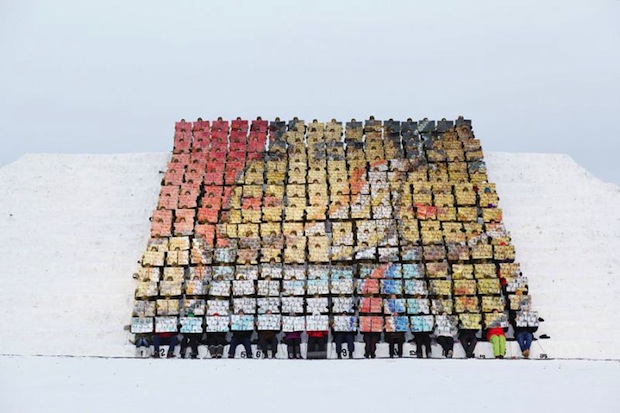 This is how he managed to bring North Korean musicians and artists to the Barents Spektakel festival in Norway, and that’s how he managed to get in return a Norwegian festival in Pyongyang. Photos from the artist, Norwegian music and various performances were on the program. It’s one of the rare occasions DPRK citizens were in contact with foreign culture. And their response was enthusiastic, to say the least.

There is something fascinating when looking at a satellite view of Pongyang, the capital city. Although the city is presented as a modern place, and its architecture is trying to live up to this image, something becomes odd when one zooms in. Something unlike any modern capital of this world: it looks empty. There are few cars driving on giant boulevards, a few more walkers. And that’s it.

Fascination is also what attracted a few artists who got to visit the country (at least, the parts they were allowed to visit) and bring back a testimony which, if it is not exhaustive, is still an interesting glimpse of true life in the secluded country.

David Guttenfelder, Christopher Morris and Thomas van Houtryve are among the photographers who had this odd privilege, and their work speaks for itself: beyond the satellite view, there are real people.

North Korea recently announced that they would launch nuclear tests, supposedly to prepare their defense against USA.
Obviously, a lot of things still need to be done to help the country’s citizens.
Art can be a door opener and gather people together to fight for their human rights. If they can achieve this, it will lead to their freedom. Which will lead to everything.