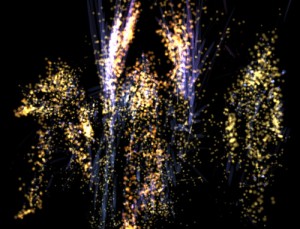 Have you ever tried to make a phone ring just by looking at it? To make time go faster by watching the clock hands (but very, very intensively)?

Carrie could throw a hell of a party with only her mind. Samantha just had to touch her nose to do magic. And any Jedi could do very cool things using the Force.

Unfortunately, most of us are still unable to do all of those things just with our minds (or noses). Hopefully, we can always use what technology has invented for us, and move towards this place.

What was at first a very exciting perspective in fiction has finally become real. Examples are multiple: remember Tom Cruise doing funny things on touchscreens in Minority report? Well, that’s now a reality.

Excellent anticipation mini series Black Mirror also used a similar principle in one episode, depicting a possible scary future for Humanity, allowing you to do a lot without even moving from your bed… but also making you more of a slave (little spoilers ahead):

Kinect was launched in November 2010. The concept of capturing movement and image was at first designed for video console Xbox, but the doors opened by this new technology were so large that it was only a matter of time before developers and artists used it for their own purposes.

Rafael Lozano-Hemmer is litterally putting technology at the service of Art. His installation Tape Recorders, exposed in Sydney’s Museum of Contemporary Art, uses a kinect sensor to measure the time one spends in front of a piece of art. The results are then recorded and everyone can know how long the piece has really been contemplated.

Patricio Gonzalez Vivo uses (among other things) a kinect sensor in his installation Efecto Mariposa, a reflection on the butterfly effect. With ashes coming from a volcano eruption, he creates the illusion of an ecosystem and shows its ability to adapt to natural disasters and adversity.

James Alliban has given us a real-life Peter Blaskovic’s game. His installation Traces encourages visitors to move in front of it, and the interaction between the human and the machine creates a beautiful new form of ballet. No need to know how to dance to do something beautiful.

Still on the interactive side, Pablo Gnecco‘s Transient is an installation made of tulle bands suspended in the air, that becomes a surface in which visitor’s movement are translated into light. Or how a scientific design can transform into a simple moment of grace.

Ethno Tekh is the result of the collaboration between two artists, Brad Hammond and Chris Vik, who create performances based on the interaction between the artistic and the digital worlds.
Those multi-creators got to perform recently at the Enigmatik Vibrations‘s show in Australia, and gave us a very good electro set where the kinect is used to create loops and sound effects, thanks to the software they developed (and give for free), Kinectar.
And of course, they also showed us what is probably the most creative way to use a beer…

Art is in constant evolution, thanks to artist’s imagination and use of any material at their disposal. For once, a major company authorized the hacking of its product, and when we see the creative results, we can’t wait for the rest of it. It’s not Carrie yet, but we’re getting there.