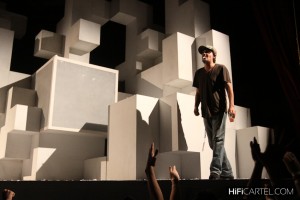 A pair of jeans, a t-shirt, and a cap. If you passed Amon Tobin in the street, you wouldn’t turn your head. This is too bad, because then you would just miss the chance to meet a magician, currently touring the world with his incredible show, ISAM.

The night is about to fall on the city, lights starting to illuminate the streets, as a prelude to what will follow. People are gathering in front of the concert hall, and you can feel the excitement growing, electricity in the air.

The place is dark, it’s hot in here. There are more and more people, brushing against each other, more and more impatience. Then the music starts. Tobin’s Ninja Tune’s fellow DJ, Lorn, does his magic, he crushes us with his massive bass, setting up a dark and perfect atmosphere.

After a loud and sweaty set, everybody is ready. Lights are moving behind the closed curtains, as if aliens were landing there. People are finding their place in the dark, nobody wants to miss a second of it.

And then it begins.

The curtains open on a big structure made of cubes. Light starts to illuminate them, one by one, then all at once, it’s like the whole structure is moving, carried by the light, changing shape along with the music and visual effects, perfectly synchronized.

We are now in a ship, preparing for its mission. Its metallic parts fit into one another loudly.

Then it accelerates. We are now about to take off to space. The sound and the lights change faster and faster, until we don’t know anymore which one is driving the other, the bass and percussions carry us, and the cubes are moving fast and changing and changing back and it never ends and we never want it to end and then suddenly, it stops.

The big cube in the middle illuminates and shows us the artist playing. Immediatly, the crowd responds with even more enthusiasm, but as quickly as he appeared, the master of the show disappears again into his box of light, and takes us to the next part of the journey.

All of the above lasts only ten minutes or so. The entire show is a constant visual and auditive hallucination, a travel through space, to the artist’s planet, maybe. We are caught in a flow of sound and light, sometimes quietly, sometimes with all the energy in the world, until we don’t know where we are anymore, and it is just music and light, and music and colors. And happiness. 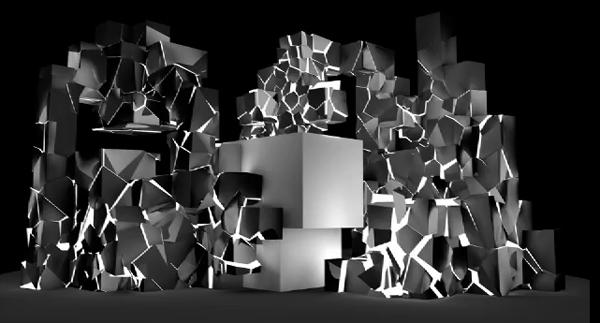 When he released ISAM in 2011, electro magician Amon Tobin described it as a sound sculpture. So when the time came for a tour, he litterally built the sculpture. Surrounding himself with designers and creators at V Squared Labs, Leviathan, Vita Motus and Blasthaus, he created a set that completes perfectly the music album, and has been touring since 2011, leaving every show goer mind blown.

As the spectacle sadly ends (it’s the moment when you think “What? Already? Come on. No. No!”), Tobin gets out of his cube to greet those he just took to heaven with him. A pair of jeans, a t-shirt and a cap.

But mostly, a smile that says it all.

A dangerous field mission by