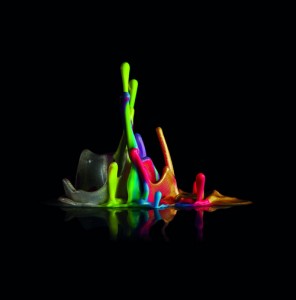 Synesthesia must be one of the greatest neurological conditions one can experiment.

And one of the most creative. The list of artists affected by it is long and representative of its influence on Art.

Several types of synesthesia exist, affecting different senses. One of the most common is the association between letters and colors, or sounds and colors. It can also be sounds and shapes. There are multiple combinations, each one of them opening new doors.

Trying to explain how synesthesia feels to those who haven’t experienced it is a very interesting project, and it has been done in many different ways by artists, using music, painting, sculpture, or words.

“I could see in my mind all my colors, they were standing in front of me.”

This is how the famous Russian artist Vassili Kandinsky described his own perception of synesthesia, which affected him, when he was listening to music (he even created an opera on this theme). And it’s easy to see how it had a large influence on his abstract paintings.

But one does not need to be affected by this condition to be inspired by it. Chris Cunningham, who has directed some of the best music videos, worked a lot with the musician Richard D. James, AKA Aphex Twin, who claims to be a synesthete himself. Together they delivered some possible representations of what it’s like, in “Flex” for example:

The fact that several types of synesthesia exist should be enthusiastically welcomed by us, since it brings an almost infinite amount of possibilities to express it using art:

To sense something and feel something else, to respond to a stimuly in a completely unexpected way, might be called a “neurological condition”, but it surely is a fantastic one.

(The shape of sound, by Daniel Franke & Cedric Kiefer)